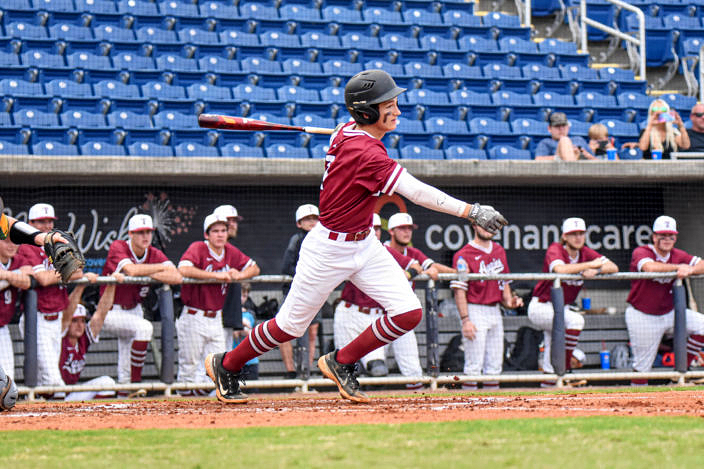 The Aggies won both of their games at Blues Wahoos Stadium, with a 12-0 win over Choctaw and a 7-4 victory over Fort Walton Beach. *Photo from @BlueWahoosBaseball.

Blue Wahoos Stadium served host for its final March high school games this weekend, with four of the five total contests played on Friday and Saturday. The Tate Aggies won 12-0 over the Choctaw Yellowjackets on Friday afternoon, and then posted a 7-4 win over the Fort Walton Beach Vikings on Saturday night, and the Navarre Raiders earned a 6-5 victory over the West Florida Jaguars on Saturday afternoon.

The Raiders also held a 2-0 lead over Fort Walton Beach in Friday night’s game, before the contest was postponed due to a thick fog that rolled in and limited visibility. That outcome will now be decided when the two teams complete the game on April 5th, at Navarre.

The Escambia Gators won 5-3 over the Gulf Breeze Dolphins in the other game played at Wahoos Stadium, on March 15th. 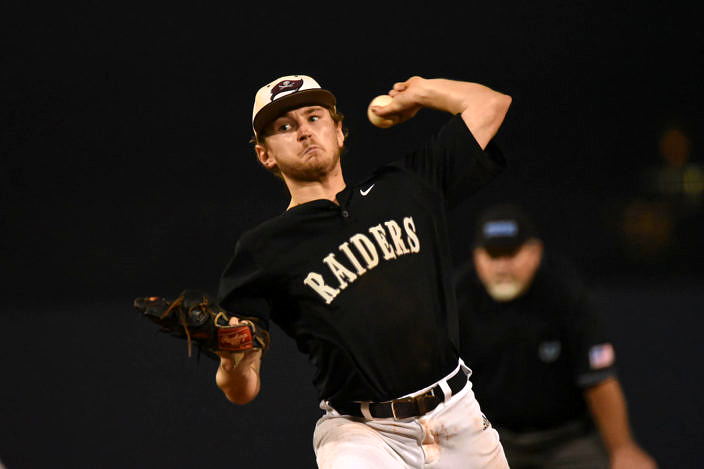 Left-hander Korey Betts threw four shutout innings for Navarre on Friday, before the game was postponed. *Photo from @BlueWahoosBaseball.

The Pensacola Blue Wahoos are the Minor League Double-A affiliate of the Miami Marlins, with 2021 serving as their inaugural season after the club relocated from North Carolina in 2020. The chance for high school ball players to compete on any professional field is a privilege, but there is something uniquely special about that pristine stadium with a backdrop view unlike any other.

“It is a great atmosphere and a great experience for our kids,” said Tate manager Karl Jernigan, in an interview with the Blue Wahoos Katie Florio. “You cannot ask for a better setting than the Wahoos Stadium, one of the best ballparks in Minor League baseball.”

The Aggies (8-3) got to be one of the first teams to enjoy the stadium this weekend, in their matinee victory over Choctaw. Despite the final lopsided result, early on the action was tight, as both starters held the opposing offense scoreless through the first four innings. Tate starter Josiah Glodfelter went five shutout innings to set the tone for his staff, while Yellowjackets starter Kobe Riggs managed to match him through the first three frames. 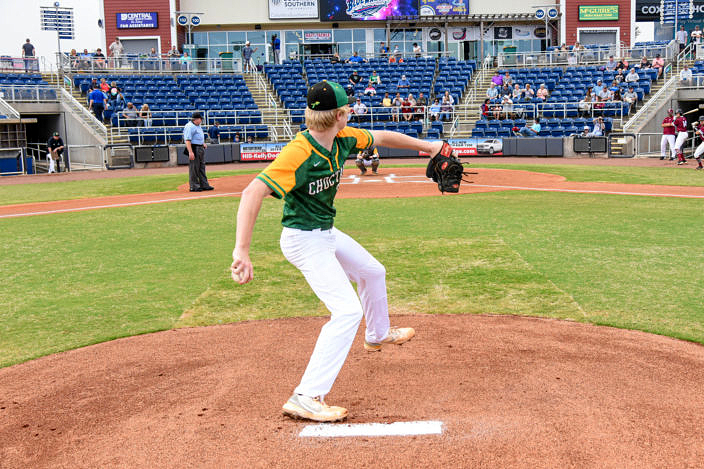 The Blue Wahoos make a dream come true to allow high school pitchers like Choctaw’s Kobe Riggs the experience to pitch off this mound. *Photo from @BlueWahoosBaseball.

Once Tate got the scoring going, it seemed as though the Aggies could not be contained. A pair of runs in the fourth accounted for all the difference necessary for the victory, as Zak Licastro doubled and scored the winning run off an error, and Frankie Randall followed with an RBI double that plated Dalton Bowen.

The Aggies opened things up with five runs in the sixth, and five more in the seventh. Jadon Fryman had an RBI single, Licastro supplied an RBI double and Bowen drove in a pair with an RBI single.

Licastro and Fryman both went 2-for-4, while Randall was 3-for-3 with two runs.

Glodfelter picked up the win to improve to 4-0 on the season. The junior allowed two hits and no walks, and he had 10 strikeouts to increase his team-leading total to 54 on the year. 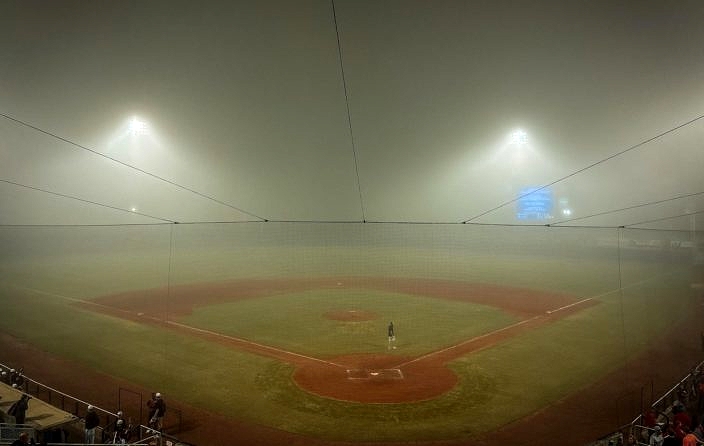 A thick and heavy fog forced the game to be halted in the top of the fifth inning on Friday night. It will be completed April 5th at Navarre. *Photo from @BlueWahoosBaseball.

Pitching again took center stage in the nightcap, as both starters again kept it scoreless early on. Navarre’s Korey Betts went four shutout innings, allowing two hits and a walk, while also hitting a batter. The southpaw struck out two and is in line for the victory, should the lead hold upon eventual completion.

The Raiders (5-6) put themselves in the lead thanks to a pair of runs in the bottom of the third. Vikings starter Alex Kuse posted two scoreless innings to stay in par with Betts, before surrendering two unearned runs. Ethan Andre reached on an error leading off, Jozef Vanselow walked and Devin Wright loaded the bases after reaching on a bunt. Kolby Vitale had an RBI ground out that plated both runners for the 2-0 lead.

By the top of the fifth inning the fog had become too thick to continue playing. 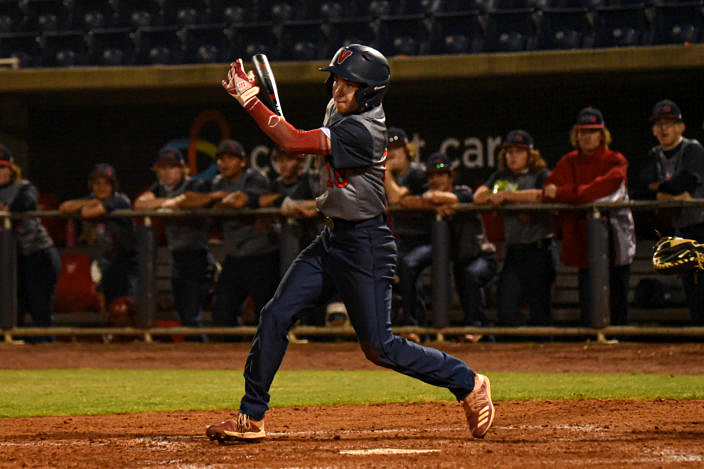 On Saturday night, the Raiders finally enjoyed the thrill of a Wahoos victory celebration, with their close win over West Florida. The two sides exchanged blows back-and-forth, before Navarre broke a 3-3 tie with a three-run sixth inning. Trent Hall got it started with a single, and he then gave his team the lead after Devin Wright reached on an error. Vitale delivered an RBI single, and John Mahoney executed in the clutch to drive in the winning run with an RBI bunt to third base that gave the Raiders a 6-3 lead.

West Florida did not go down easily, rallying for two runs in a comeback bid that just fell short. Chase Dethlefs walked, Jadin Moren reached on an error and Brandon Hardtke was hit by a pitch that loaded up the bases. Hunter Brown worked an RBI walk, and Hoot Rathburn worked off two relievers to also draw an RBI walk, pulling the Jaguars (1-12) within a run of tying things back up.

Levi Hawley then recorded the final out to earn the save and preserve the victory.

After Jaxson Cramer reached on an error in the bottom of the first, Andrew Robinson connected on the first of three hits to drive him in and make it a 2-1 deficit. Robinson was 3-for-3, and he also drove in Moreno with an RBI single in the third. 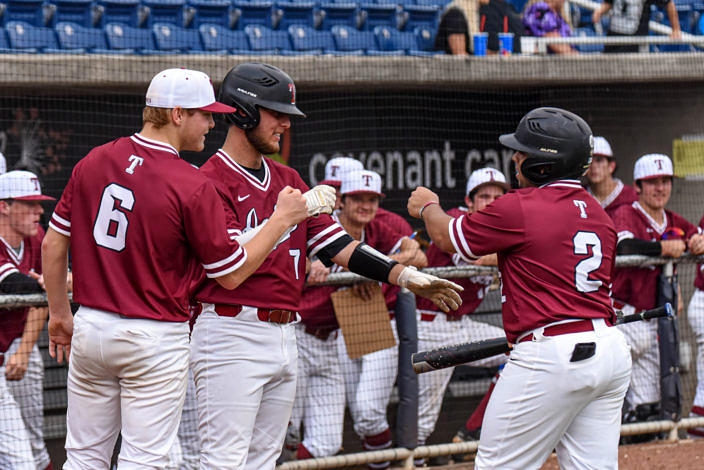 Joey Indelicato drove in John Mahoney to give Navarre the lead in the first, and he had another RBI that plated Trent Hall in the third. Hall scored three runs and Mahoney was 3-for-4 with a RBI, a run and two stolen bases.

The Aggies got the offense going much sooner in their win over the Vikings on Saturday afternoon. Tate scored three runs in the bottom of the first, and led the entire way. Jadon Fryman delivered a two-RBI double that drove in Dylan Godwin and Drew Reaves, before coming in as well on an RBI from Dalton Bowen.

Tate made it a 5-0 by the end of the next inning. Reaves drove in Godwin with an RBI single, stole second and scored on an RBI double from Zak Licastro. Licastro supplied another RBI double and Bowen had a sac-fly RBI, as the Aggies tallied their final two runs in the fourth.

The Vikings (5-8) battled back to stay in it with a pair of runs in both the fourth and fifth innings. Kameran Belser and Tyler Thompson walked, and Kaden Williams had a ground out that allowed both runners to score. An inning later Jett Brister walked and Jackson Crews doubled to put both runners into scoring position, where Belser came through with an RBI ground out and Yan Rivera-Fernandez followed with an RBI single. 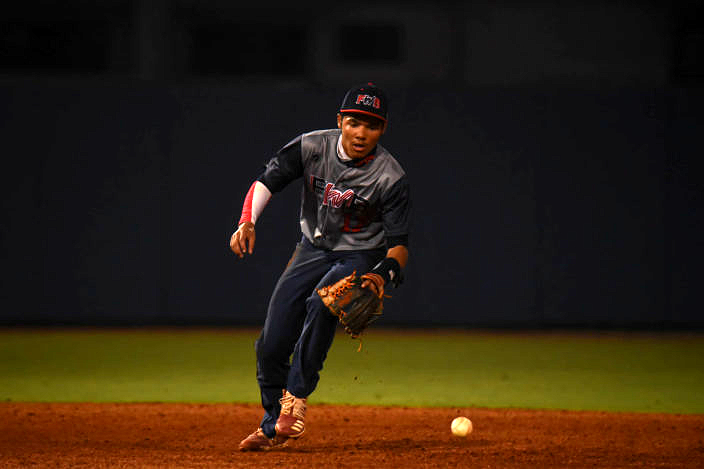