Pace Walks Off Tate For District 6A-1 Championship 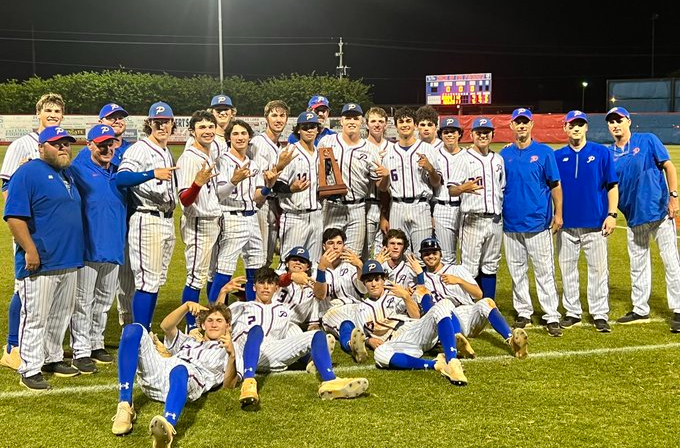 The 2022 District 6A-1 champion Pace Patriots. *Photo from @pacehighbaseball.

If you are a baseball fan you cannot help but appreciate every time that the rival Pace Patriots and Tate Aggies face off. Once again that showdown did not disappoint on Thursday, as the Patriots earned a tough, 5-4 victory over the Aggies in the District 6A-1 championship. After Tate (22-3) tied things up in the top of the seventh, Pace (22-3) rallied for the winning win and the walk-off victory in the bottom of the seventh.

Pace also wins the rubber match this season in the third meeting between the two rivals, with a good chance that they could meet again in the regional playoffs that begin next week. What is certain is that the Patriots will host a home game in the opening round of those regionals, as the district winners.

With things all tied up in the bottom of the seventh, Broc Parmer reached on a one-out error and Ty Humphreys was then intentionally walked to try and set up for a potential double play. But a pair of wild pitches erased that effort, as the second errant throw allowed Parmer to come home with the winning run.

The Patriots did not manage a ton of offensive success, but they made their base runners count. Junior Alex McCranie had half the club’s hits by going 2-for-4 with an RBI double and a run.

After Pace opened a 3-0 lead midway through, the Aggies got their offense going to rally back and tie things up. Drew Reaves scored on a wild pitch in the fourth, and then Jackson Penton doubled and scored on an RBI single from Caden Kelly in the fifth. Kirk Mosley singled and then Bray Touchstone connected for a two-run home run that tied things back up in the top of the seventh.