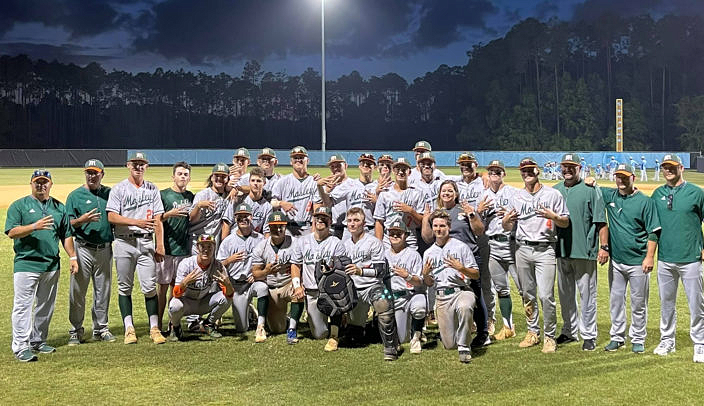 The Mosley Dolphins won Region 5A-1 with a 13-1 win over the Ponte Vedra Sharks on Wednesday. *Photo from @MosleyHighSchool.

The Mosley Dolphins jumped to a big lead out of the gates and never looked in the rearview mirror, cruising forward to a 13-1 win over the host Ponte Vedra Sharks in Wednesday’s 5A-1 Regional Championship. The Dolphins (25-5) advance back to the state Final Four at Hammond Stadium in Fort Myers, the sixth time in program history they have reached the state tournament.

Mosley will face the Jefferson Dragons (19-10), who walked off with a win over the Land O’Lakes Gators in Wednesday’s 5A-2 Regional Final.

Ponte Vedra (13-15) caught fire in the playoffs to turn around a difficult season, winning the 5A-4 district title and then upsetting the Stanton Blue Devils to reach within one game of the state tournament. But the Dolphins quickly proved to be no match.

Every offensive starter reached base to contribute to the victory, with Rock Holland leading the way by going 4-for-4 with a double, a home run, two runs and four RBI. Trent Nelson was 2-for-3 with a run, and David Hudson went 1-for-2 with two walks and three runs.

Jaden Rudd took care of business on the mound to earn the win and improve to 6-1 on the season. The senior left-hander went four innings while allowing an unearned run on two hits and three walks. He struck out five, and reliever Blake Thomas punched out two more batters during a scoreless fifth inning that closed out the action.