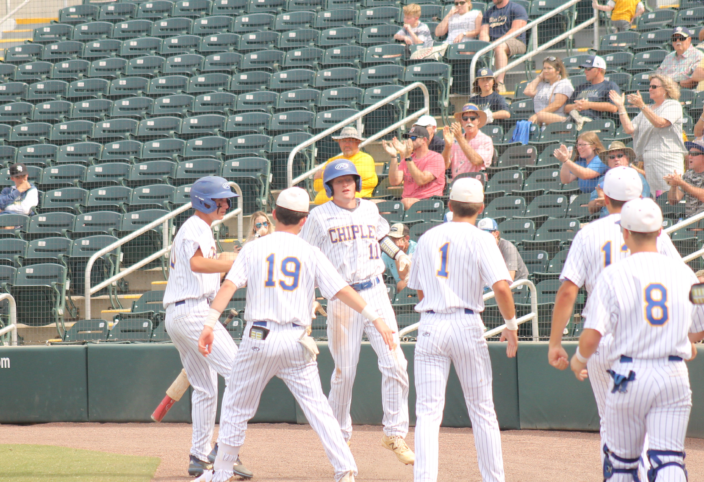 The Tigers celebrate during a two-run first inning.

The Chipley Tigers and Holmes County Blue Devils have a long, storied rivalry history between them. With roughly eight miles separating the two schools, it is a match up that is important to the entire community. Only this time, the two schools had to travel over 500 miles in order to play.

Facing off on the grand stage of the FHSAA State Final Four at Hammond Stadium in Fort Myers, this rivalry game had never carried larger implications with it. but on this day it was all the Tigers, as Chipley got going early and never looked back in earning an 11-1 victory in five innings.

“I thought tonight was a great night for us,” Chipley Manager Andy Compton said. “Bryson Howard started off with us and he threw strikes and he got us going, and we had some timely hits. I am just proud of our guys. We’ve come a long way. With Holmes County being only eight miles away, it is an emotional game every time that we play. But I thought that we played well. Hopefully, we keep it up.”

The Tigers (26-1) earned a berth into Thursday’s Class 1A state championship, which will also be played at Hammond Stadium at 7:00 PM. Chipley will face the Newberry Panthers (24-1), who also advanced thanks to a 3-2 win over Holmes County in Wednesday’s other 1A semifinal. 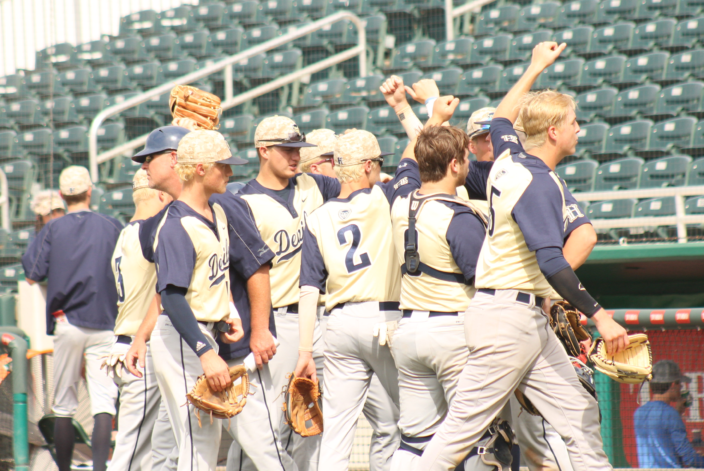 The Blue Devils huddled before rallying to get on the scoreboard.

“We’ve worked really hard on that, and in the last half of the season we have executed really well,” Compton said. “It is just a credit to our guys. Whoever is up, they just do it. I’m just proud that our guys showed up on the big stage. We drove a long way. But this is where it needs to be. I had people asking my why we didn’t play them back home, but this is where it needs to be. Our guys need to experience this place and what they do here for high school baseball.”

All nine starters in the Chipley lineup reached base to contribute. They had nine hits total, led by a 2-for-2 day with two walks and two runs for sophomore Neal Adams. They also collected four walks, had three hit batters and three players reach on error.

“I don’t think Chipley or us thought that it would have gone like it did,” Blue Devils Manager Jeromy Powell said. “We thought we had the kids prepared for the game, and this is the first trip that I have taken down here. It is very humbling for us even to get down here. We weren’t supposed to be here, and we gave ourselves a chance just by winning the regional. You have to tip your hats to Chipley; they played their butts off. We had some young guys make some mistakes, and I think that they capitalized on every one of them.”

On the mound, Chipley was just as lethal. Sophomore Bryson Howard made the start and went the distance for the win, allowing four walks and a hit to go along with seven strikeouts. He improved to 9-0 in his final start of the season.

“My mindset from the beginning was to step on their throat and don’t let them get air,” Howard said. “I wanted to take away any chances that they had to score any runs, and keep it at a bare minimum.” 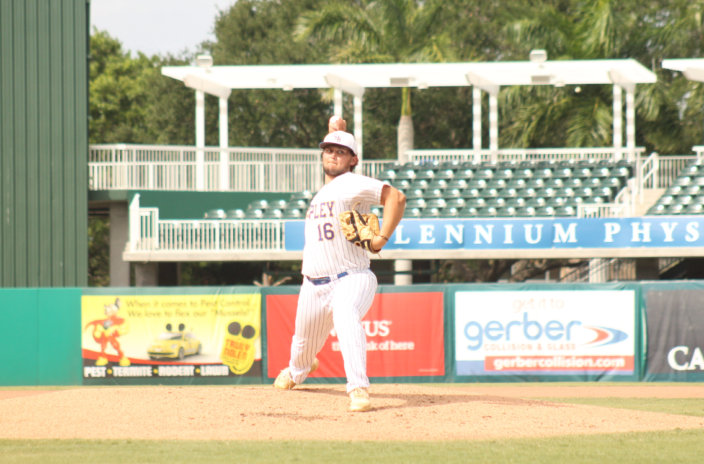 Bryson Howard started and went the entire way to earn the win for the Tigers.

With two freshmen, a sophomore and several juniors in the starting lineup, a comeback became tougher and tougher to achieve with every run the Tigers tacked on. Chipley added a run in the second and three more in the third inning to go 6-0, the last coming on a wild pitch on ball four of a gritty, nine-pitch at bat from freshman David Carley.

Carley was 1-for-1 with a run and two RBI, and he also walked twice.

“They did what they had to do at the plate,” Powell said. “They got up there and they were really hitting the ball. They found holes and it was a tough break. It was especially unfortunate, because I had a couple of younger guys that I really wanted to get in the game. But I didn’t have that opportunity to.”

Despite trailing by a large margin, the Blue Devils kept chipping away. They finally got on the scoreboard with a run in the fourth, as Cole Newberry had a two-out double and then scored on an RBI single from Carson Jackson.

“That is just how we’re coached,” junior Colby Jones said. “Coach Powell has done a great job this year, doing everything to keep us in line and never quit, no matter how bad it gets. As bad as we were getting beat, just keep fighting. You never know what is going to happen.” 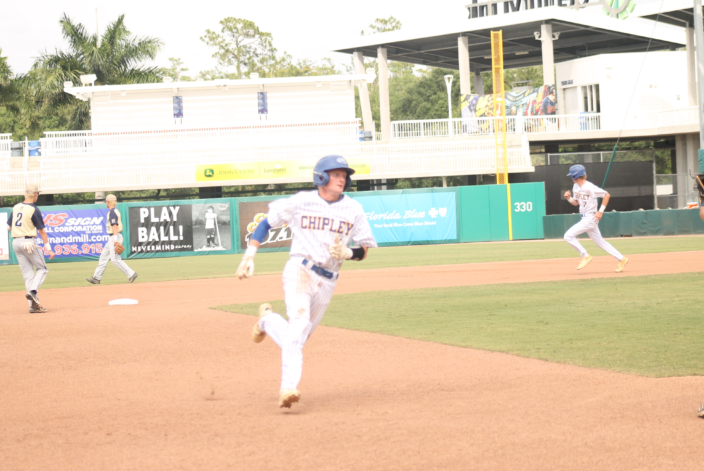 The Tigers had base runners in every inning.

While the Blue Devils stayed upbeat and optimistic, the Tigers were mindful not to celebrate early and assume a big lead guaranteed a victory. Every player managed their emotions to stay even-keeled and still hungry for more.

If one looked at the players on the field and their body language without knowing the score, it was not crystal clear that one team held a sizable advantage.

“I’ve played a lot of baseball games. I’ve been down and come back, and they have come back and beat us. The game is not over until it is over. We just had to keep that mindset that anything can happen until it is really over,” Holmes County’s Bryan Stone said.

Across in the opposing dugout, the Blue Devils continued to trust and believe that they could do exactly what Chipley worried they could. Holmes County had already rallied from a big deficit to nearly comeback and win in an 8-7 loss to the Tigers earlier this season.

“You just play it one pitch at a time,” the Blue Devils Cody Pate said. “I just tried to keep my head up, no matter what. You never know with baseball, you find a gap and good things can happen. Our backs were against the wall the entire time and we just kept fighting.” 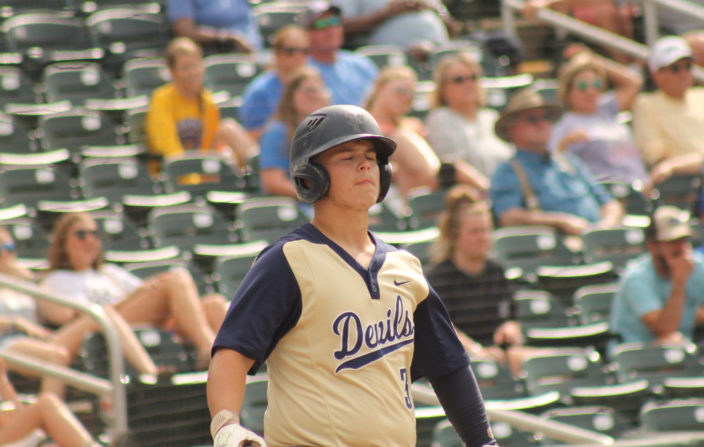