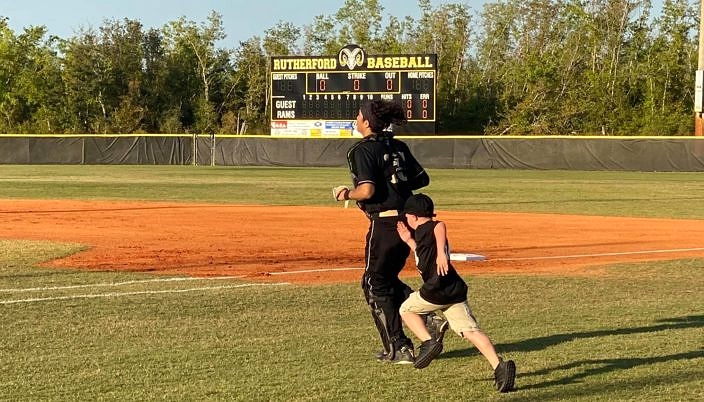 A member of the Callaway Youth Baseball team jogs alongside a Rams player as they take the field together prior to Tuesday’s win over Wewahitchka. *Photo courtesy of @rutherfordramsbaseball.

The Rutherford Rams welcomed some very special guests onto the field prior to Tuesday’s home win over the Wewahitchka Gators, as members of Callaway Youth Baseball joined the team for a special pre-game session before then enjoying the Rams’ 14-9 victory. The recreational baseball team is based out of Panama City, and they were invited to warm up with the players and then stand alongside them for the playing of the National Anthem at the start of the game.

The two teams then put on an offensive display that would delight any baseball crowd.

“We were honored to host Callaway,” Rutherford manager Jamie Bukowski said. “We went to their facility about a month ago on a Saturday morning to host a three-hour clinic. I think it’s a valuable asset for a high school program to be involved in its local youth league. It gives our boys a chance to give back to the league that a majority of them got their start in, and it also gets the young kids excited about seeing where they may be able to play as they get older. The young players really bond to the older guys, and look up to them, and in turn our players really bonded with them.”

Rutherford (5-11) jumped out with the early lead with two runs in the bottom of the first inning, and added two more in response to the Gators’ first run in the top of the second. A six-run third inning broke things open and put the Rams in the driver’s seat to victory, but the Gators (0-16) refused to go quietly by rallying late for four runs in both the fifth and sixth innings.

The early offense provided enough of a cushion to secure the victory, as starter Noah Johnson picked up the decision. Johnson allowed one unearned run in four full innings, surrendering three hits and hitting one batter while recording eight strikeouts. The junior right-hander improved to 4-2 on the season. 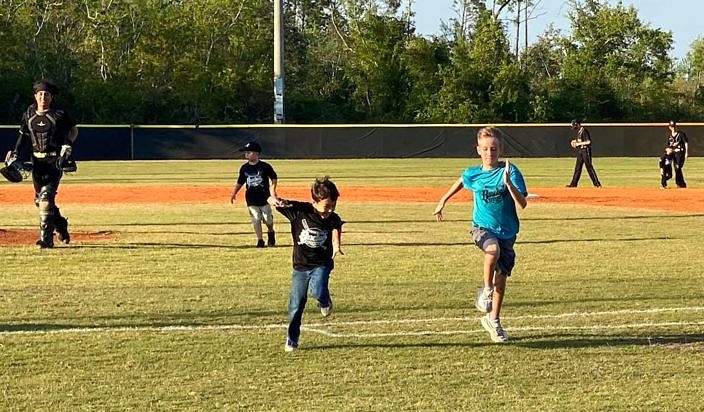 There is no mistaking the happiness the players for Callaway Youth Baseball felt being on the field with the Rutherford Rams on Tuesday. *Photo courtesy of @rutherfordramsbaseball.