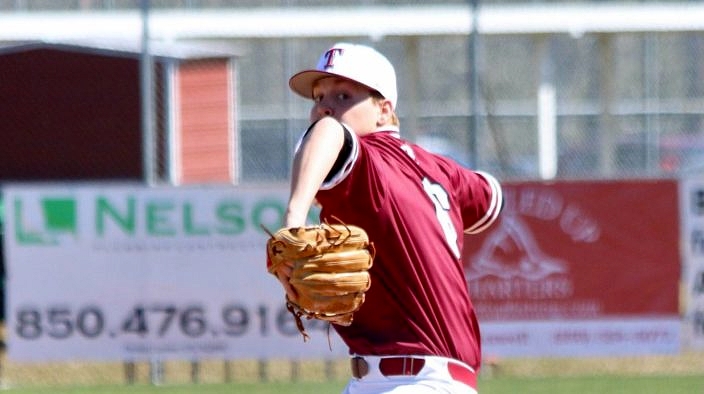 Tate starter Josiah Glodfelter struck out seven in four scoreless innings of work to earn the victory on Saturday. *Photo courtesy of Sports Photography by Laura.

Through a week of play, the Tate Aggies have yet to surrender a run this season.

With another dominant pitching performance, Tate improved to 2-0 on Saturday with a 5-0 shutout victory over the visiting Crestview Bulldogs. The trio of Josiah Glodfelter, Drew Reaves and Jadon Fryman combined to limit the Bulldogs (0-1) to just three hits and four walks. It came on the heels of a 10-0 shutout win over West Florida by Jordan Jarman and Tanner Rouchon in Friday’s season-opener.

Rain has disrupted much of the first week of baseball, forcing most area games to be rescheduled all week. Some teams have yet to take the field this season due to the weather and field conditions.

The Aggies wasted no time in taking advantage of the sunny day and the chance to swing the bats, as they put up two quick runs with their first swings in the bottom of the first inning. Dylan Godwin lined a single to center, and Fryman and Reaves both followed with walks that loaded up the bases. Zak Licastro then jumped on a 1-0 offering and lined an RBI single to center. Fryman then scored on a wild pitch for the early 2-0 advantage. 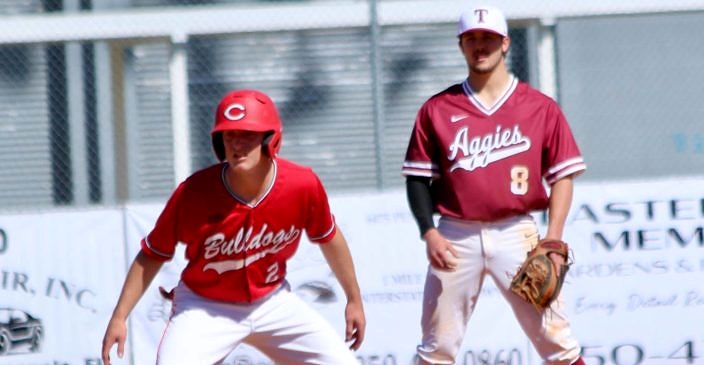 Crestview’s Avery Dauphin (#2) reached base twice, with a single and a walk. *Photo courtesy of Sports Photography by Laura.

Those were not all the runs they got in support, but they were ultimately all that the pitchers needed. Glodfelter was strong out the gate, picking up two of his seven strikeouts in the first inning. The junior right-hander went four full frames, allowing two hits and a walk, before turning things over to Reaves.

The Bulldogs were patient and managed to draw three walks from Reaves during his two innings of work. But the right-hander was toughest when he needed to be, stranding a pair with a strikeout that ended the fifth, before his defense backed him with an inning-ending double play that ended the sixth.

Fryman recorded a 1-2-3 frame in the seventh, although that is a bit deceiving. After a liner to center retired the lead-off batter, Bulldogs senior Aydan Shankland singled to right but was thrown out tying to stretch the hit for a double. A grounder back to the mound then closed out the shutout for the Aggies. 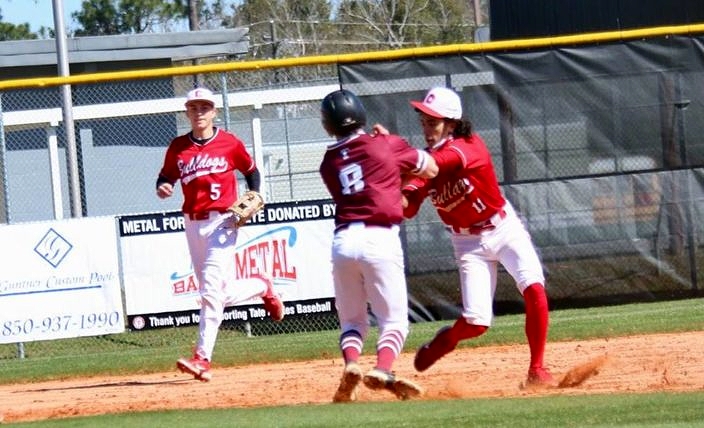 Crestview’s Maddox Wesolowski gets tangled on the bases with Tate’s Dylan Godwin. *Photo courtesy of Sports Photography by Laura.