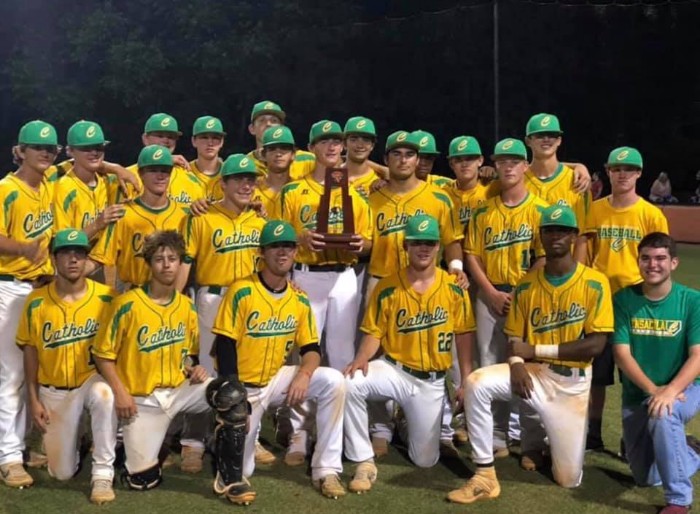 For the fourth straight season, the Pensacola Catholic Crusaders are district champions. The team added its latest 4A-1 trophy following a 6-0 shutout victory over the North Bay Haven Buccaneers in Thursday’s title game. Catholic (20-6), the No. 4 ranked team in the Panhandle Baseball Power Rankings, will now host the Episcopal School of Jacksonville in a regional semifinal on Tuesday night at 7:00 P.M.

Court Connally picked up the win on the mound for the Crusaders, as he went the full seven innings for the complete-game shutout. The junior right-hander allowed three hits and also hit two batters, while posting eight strikeouts.

A five-run third inning provided more than enough run support. Dustin Chabot drew a walk and scored the game’s first run thanks to an RBI double Max Bell. Colin Whibbs followed with a single to left and Jordan McCants drove in both base runners with a two-RBI triple on a shot deep to right field. TJ McCants came next with an RBI single, and he later scored on a wild pitch.

TJ McCants provided the final run in the fifth, with a sac-fly RBI that drove in Bell.

The Buccaneers (7-19) were limited to just three hits, two coming from Wade Wilmot. The No. 3 seeds were fresh off a massive, 15-0 semifinal upset over the Florida State University Seminoles, which also earned them a berth into the regional playoffs. North Bay Haven will travel to Trinity Christian in Jacksonville on Tuesday night.