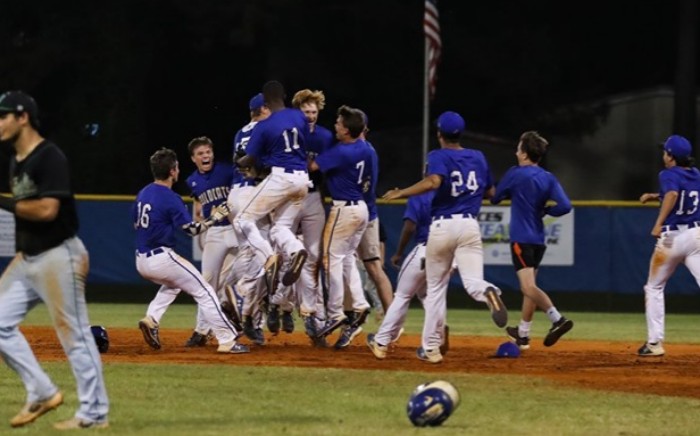 The Wildcats celebrate after Robert Sherlock’s walk-off RBI double in the ninth inning on Wednesday night. *Photo courtesy of @btwbaseball1.

The Booker T. Washington Wildcats stayed red hot by winning their ninth straight on Wednesday night, after Robert Sherlock’s RBI double in the eighth inning gave the Wildcats a 6-5, walk-off victory over the Pensacola Catholic Crusaders. Washington (16-8) scored three runs in the bottom of the eighth, after Pensacola Catholic took a 5-3 lead with a pair of runs in the top of the inning.

It only seemed a fitting end for Sherlock, after the junior had such a big night already. The right-hander delivered seven strong innings on the mound, holding the Crusaders (18-5) to one earned run on four hits and two walks and striking out four. He was also 2-for-3 with two doubles at the plate.

Senior Sam Jackson also had a big game to aid in the victory, going 3-for-5 with two doubles and three RBIs. Drayton Braddock singled, Dawson Kuba reached on an error and Zavion Anderson also singled to load the bases for Jackson, who then tied things up when he laced a double into center field.

The Crusaders wasted no time in jumping ahead in extra innings. TJ McCants led off with his second hit of the night on a double to left and then was able to advance from first to third on a sacrifice bunt from Antonio Witt. Court Connally then delivered an RBI ground out that easily plated the runner from third, and later in the frame courtesy-runner Nathan Howell scored on a passed ball.

TJ McCants was 2-for-4 to lead the Crusaders, while Max Bell and Jordan McCants had RBI singles.