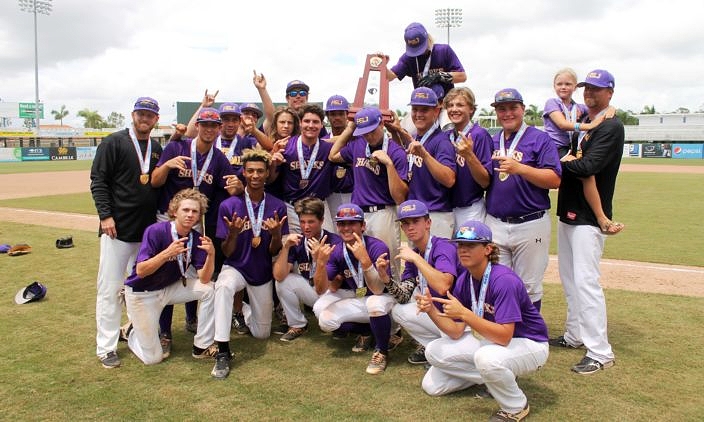 For the rest of time the 2018 Port St. Joe Sharks will be immortalized at the school, a team that came together with a special bond and carried that all the way to a state championship. Monday afternoon the Sharks culminated their impressive playoff run by dogpiling together on the field at Hammond Stadium in Fort Myers, after earning a 4-0 win over the Madison County Cowboys to earn the Class 1A state championship.

“Before the season started, it was just a dream,” senior Josh Butts said. “Then Coach Summerlin came in and he did a great job. He literally turned the entire program around and he was really harsh on us, but it helped us in the end and we love him for it. We couldn’t have done it without any of our teammates, or him and Coach Travis Berg.”

When Ashley Summerlin first took over as manager at the start of the season, it seemed very unlikely things would end in the program celebrating its second state title together. The Sharks (18-12) last won it all back in 1997, long before any of the current players were ever even born.

“First of all, I’m just proud of our guys,” Summerlin said. “We’re excited for the opportunity to be down here and really show what Port St. Joe is all about. We’ve been a team, a program that has kind of been mid-tier, and I think we turned a corner this year and started believing in the things that it takes to win ball games. We started doing that towards the end of the year and these guys laid the way. So we’re very excited to be here. If you’re going to win a championship, you have to get hot in the right time and we obviously did. The way we pitched, the way we played defense and the way we compete at the plate, it just goes to show.”

Taking down the Cowboys in their second straight 1A title game was no simply task. Madison County was also led by a first-year manager, after former JV Head Coach Jason Fletcher took over the coaching reigns from longtime manager Terry Barrs, who retired at the end of last season. After reaching the Final Four for the first time last year, the Cowboys raised the bar in scheduling tougher competition and doing everything they could to prepare to perform at the state tournament.

“At the end of last year we knew we wanted to be back here, and that was our ultimate goal, so we tried to make the transition seamless,” Fletcher said. “We are trying to build something and set the bar high for our program, and it was all about the guys. These dudes fight their tail off everyday. We didn’t let a coaching change affect anything; it was business as usual. These guys answered the call. I’m blessed to coach with some fantastic people, and I will run my cats out there everyday against anybody. They fight and scratch. We set it up early in the year that we knew we were playing over our heads, playing some 9A teams, and some 7A and 5A teams. But we wanted to see it, and when it got down to this time of the year, we wanted to be sure that there wasn’t an arm they hadn’t seen or situation they hadn’t faced. We wanted to prepare them as much as possible.” 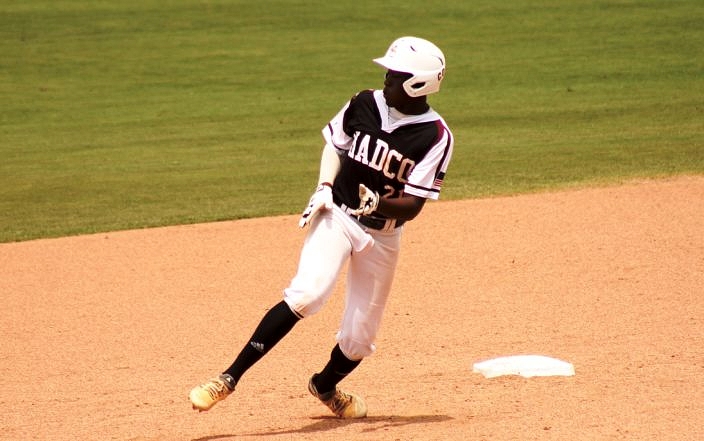 Jaebion Mitchell rounds second after blasting a triple in the top of the seventh inning for Madison County.

The Sharks drew first blood to take a 1-0 lead in the bottom of the second. Bryce Register connected for their first base hit of the day with a grounder to right field, and Jaden Grantland moved him into scoring position with a liner into left field. John Gee then delivered an RBI grounder up the middle that plated Register ahead of the relay throw from center.

Port St. Joe opened that lead with a big hit in the bottom of the third. Josh Butts and Caleb Butts both walked, and Register put a solid swing on a 1-0 offering and lined the ball deep into the right field corner to drive in both base runners, before Register was caught on the bases trying to stretch the hit into a triple.

“It is a crazy atmosphere, and we made the point that we could not let up and we could not be satisfied,” Josh Butts said. “We had to keep pressing on the guys’ throat. So every time we came into the dugout we were screaming for our guys like it was the last game we ever played. We made sure we were behind each other’s backs, because we knew if we started hitting we could rally on each other’s backs. We just have that kind of camaraderie.”

The Cowboys looked to respond in the fourth, before the Sharks’ defense came up big to hold the rope. Madison County second baseman Drew Annett walked and then moved to second on an error to get into scoring position with two outs. Logan Lepper then connected on a roller to the right side, where Port St. Joe second baseman Jaden Grantland made a nice sliding grab to get a glove on it. He then made a perfect throw to record the out and preserve the shutout, keeping all the momentum on his side of the field.

The Sharks then went back to work in the bottom half of the fourth. Grantland walked and Gee lined a single past the first baseman for a pair of ducks on the pond. Cameron Harmon then connected with the lead runner in motion for a perfectly-timed hit-and-run that plated Grantland to make it a 4-0 advantage.

The offensive support fueled starter Chris Stockton, who went the distance on the mound for the complete-game shutout. The senior scattered four hits and two walks, with one strikeout. 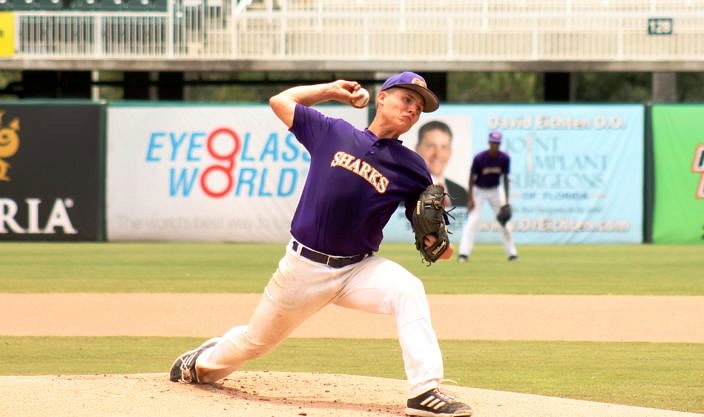 “You don’t get this stuff done without being a family,” Stockton said. “When we break down it everyday, it is, ‘St. Joe on one, family on six’. It is important to us. Every one of these guys, I’ll take a bullet for them. That’s just how it is. You cannot be a successful baseball team without doing it for your brothers. I can pitch like that all day if I want to, but when they are hitting the ball like that I have confidence and it just boosts my moral so much more.”

Some big defensive stops helped keep the Cowboys (16-12) in it after the Sharks put two more runners in scoring position in the bottom of the fifth. Josh Butts walked and Caleb Butts followed by scorching a double past the diving third baseman. Madison County first baseman Jaebion Mitchell then made a nice play by snagging a grounder up the first base line and charging up to tag the runner, while also holding the runners on their bases. A fly ball to center was then hauled in by Charlie Blanton to quell the threat.

The Cowboys had rallied back to victory several times during their playoff run, and played several extra-inning games during the year. Those experiences gave them confidence to the very end to always keep hope alive. Even down to their final swings, Mitchell epitomized that heart when he crushed a shot deep to center and raced around the bases for a triple.

“We just work hard and we never want to quit,” Mitchell said. “We just play for the team and not yourself. We all wanted the same goal – to win states.”

Needing just those final crucial outs to finish things off, the Sharks dug in and did exactly that. Register leaped up and snared a screamer to left for the second out, and Gee hauled in a pop fly for the final out that clinched the win and sparked the championship celebration.

“We were tired of losing,” junior Caleb Butts admitted. “Even with the losing streaks and adversity everywhere, and everybody was saying we weren’t going to do anything, we were getting hot at the right time. We just came together as a team and we just tried to hit, and we work on hitting a lot.”

Even with their own title hopes dashed short again, the Cowboys left the field on Monday knowing all they did accomplish. Having reached the Final Four each of the past two years after having never been there prior to that, this group helped raise the bar and set a high standard for the future teams to come. Madison County has played in four close, competitive and exciting ball games at the state tournament to let the rest of Florida see for itself the passionate and quality baseball that they play. 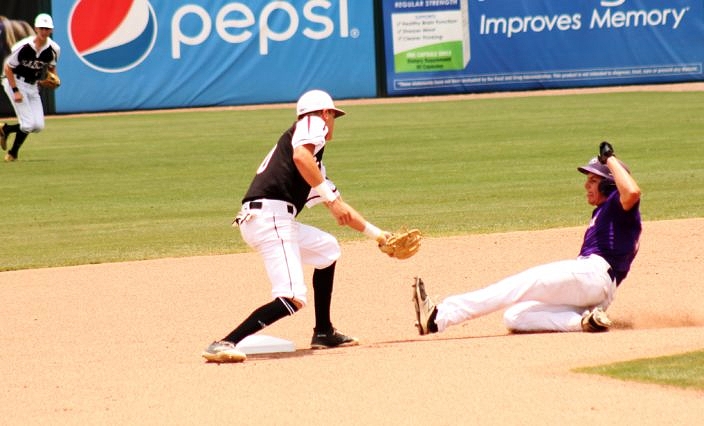 The Cowboys catch out a potential base-stealer.