Pace Holds Off Leto To Reach 7A State Championship 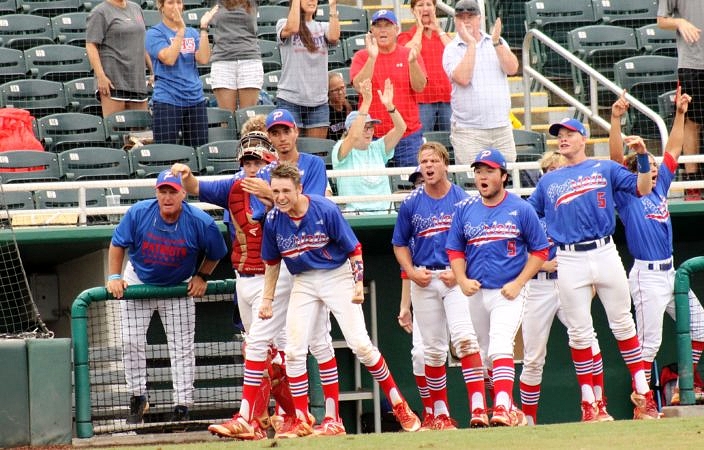 The Patriots celebrate after taking the lead during the second inning.

It was not the first rodeo for the Pace Patriots. Playing on the biggest stage is what the team sets its sights for every year, and decades of hard-working players before them helped set the standard as to what it takes to make it happen. Wednesday evening the Patriots added another chapter to team lure, earning a 5-3 win over the Leto Falcons to next play for the chance to add the team’s fourth state championship.

The Patriots (24-6) will take on the Venice Indians on Thursday evening in the 7A title game, in a meeting between two storied programs with eight combined state championships between them. The Indians (22-7) also advanced following an 11-1 win over Doral Academy in the other semifinal. Pace will be seeking its first title in eight years, after winning it all last in 2010, and also in 2006, 1990 and 1985. The team has a chance to add a 7A title to go with two 5A titles, a 3A and a 2A crown.

A pair of runs in the second got the scoring started for the Patriots to reward those fans that made the trip to Fort Myers. Aidan Gilroy walked and advanced to second thanks to a sacrifice bunt from Blake Cordova, and then moved to third following a passed ball. A liner into right field off the bat of Chase Bragg plated Pace’s first run, and Izzy Ham delivered the next when he followed with an RBI single to center field.

An inning later, Pace was at it again. Bennett Shell sent a high fly ball to the right field warning track for a lead-off triple, and JC Preacher’s single through the right side of the defense drove Shell home and chased Leto starter Jakob Ryley from the game. 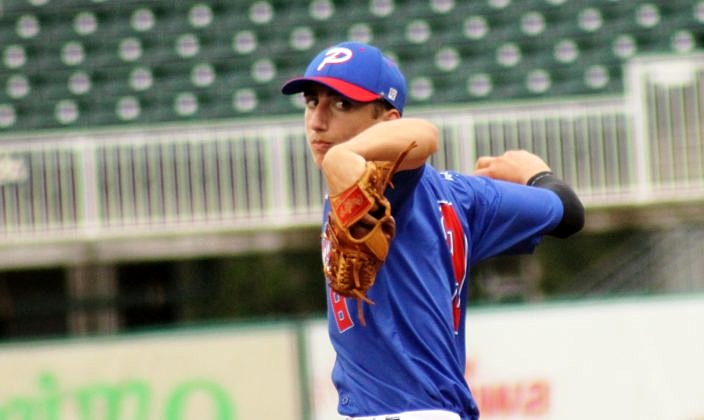 Brandon Sproat made the start and earned the win, pitching into the fifth while allowing one earned run with three strikeouts.

Meanwhile, Brandon Sproat was in control to keep the Falcons at bay. Although Leto managed base runners early on, the right-hander found his best pitches to respond and set the tone by striking out two straight swinging to strand a pair of runners in the first.

The fourth inning brought another run that increased the Patriots’ lead. Cordova reached on an infield single and advanced around the bases behind ground outs from Bragg and Caleb Vincent. Ham then rolled an RBI single up the middle for a 4-0 lead.

“It was timely hits,” Izzy Ham said. “When we had guys on second, we got the hits to get him in. We had a guy on third and we got him in, not every time, but most of the time. It just pushes us through the game, and having Brandon on the mound shutting it down and getting those outs really helps us.”

Sproat picked up the win on the mound. The junior went four-and-two-third innings, allowing one earned run on three hits and two walks. He recorded three strikeouts.

“Usually when I start off, my first innings are rusty as I try to dial it in and get my rhythm going,” Sproat said. “I didn’t really have a lot of pitches today, but mainly my fastball got me through it.”

The Falcons woke up the bats to battle back into the action in the top of the fifth. Jorge Carrero got it going with a base hit to center, before giving way to pinch-runner Damien Benton. Abel Diaz then scorched an RBI double deep to left field to get Leto on the scoreboard, before also coming in as RJ Gutierrez reached on an error. After Gutierrez stole second to get into scoring position, Fernando Muniz inched his guys closer with a single up the middle that sent Gutierrez around third and across the plate to make it a 4-3 ball game. 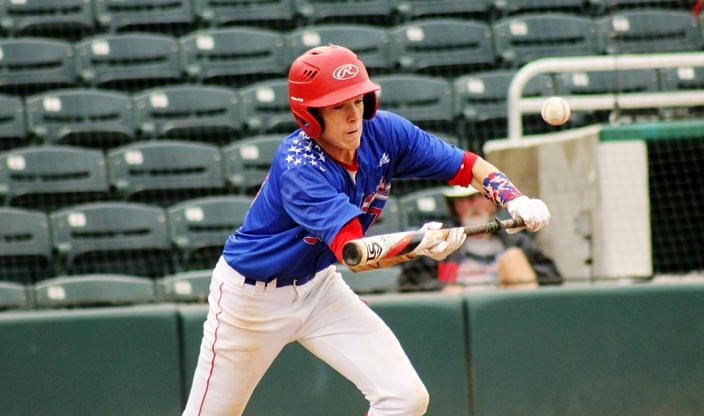 Blake Cordova drops down a sacrifice bunt to help the Patriots get things going in the second inning.

“I made my run in to the infielders from center field and told them that we still had a lead. We cannot act like we don’t have a lead in the state semifinals,” Shell said. “I think we were making it too big. We still understood that we were in the fifth, and we were still winning and we had plenty of innings to score more runs.”

The Patriots elected to turn to the bullpen at that point, turning things over to side-armer Christian McCullough. The sophomore proved up to the task, holding the Falcons scoreless the rest of the way to secure the victory. McCullough allowed two hits and struck out two for the save, making things difficult late for the Falcons in adjusting to his side-arm delivery.

“I felt confident going in and I was just trying to throw strikes and get out of the inning,” McCullough said. “I’ve just been throwing like that since I was little. It puts a little bit more movement on the ball.”

Pace added a valuable insurance run to double its lead in the bottom of the fifth. Dalton Childs singled to left and gave way to Klayton Everhart to run the bases, and he scored on an RBI double deep to left field from Gilroy. With the Falcons showing they were not going to let up, Pace also continued to fight for every run it could manage.

“I thought they were going to be scrappy, and they were,” McBride said of the Falcons. “They never quit and they kept fighting. That was why I told my guys that they had to fight for seven innings, because they were not going to quit. That is how they played today and I thought they really competed at the plate against Brandon. Sometimes facing a 90-mile-an-hour guy with that velocity can over-match high school hitters, but I didn’t feel like they were over-matched. I thought they played really hard today.” 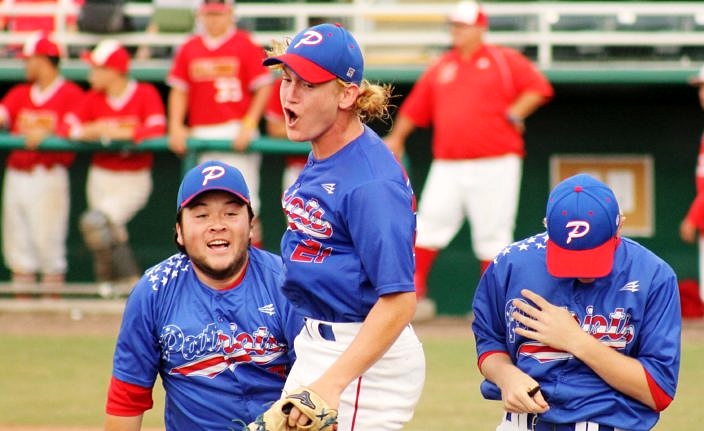 The Patriots celebrate after turning a double play to record the final outs.