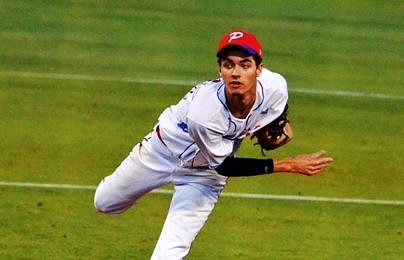 Pace’s Ty Kirchkarr struck out nine to earn the win on Thursday.*Photo courtesy of Shawnna Burkart.

The Pace Patriots rallied from an early deficit to secure a 7-4 win over the Pine Forest Eagles on Thursday, in a meeting of 7A-1 rivals fighting for playoff positioning. Ty Kirchkarr overcame a shaky beginning to deliver a quality start and earn the win for the Patriots (16-5), who held onto the second slot in the district standings with a 5-2 mark.

Kirchkarr took Pace into the sixth inning to improve his season record to 5-1. He allowed two earned runs on five hits and a walk, and he struck out nine batters on the night. AJ Martin earned the save, recording the final five outs while allowing two hits and striking out three.

The Eagles (9-12) came out swinging to take a 2-0 lead in the top of the first. John Pinette led off with a single to right and Kyler Hultgren put two runners into scoring position with a double to right. Jason Roberts pushed Pinette home with an RBI ground out and Hultgren scored on a passed ball.

The Patriots answered back to go ahead with a lead they never surrendered in the bottom of the third. Bradley Taylor and Bennett Shell both singled, and JC Preacher dropped down a sacrifice bunt that went for a throwing error that allowed two runners to score. Dalton Childs then put Pace ahead with an RBI ground out.

Childs added to the lead his next time through the order, connecting for a three-run home run in the fifth. Shell reached on a fielder’s choice and Preacher followed with a bunt single that brought Childs to the plate, where he jumped on a 1-2 offering and sent it over the right field fence.