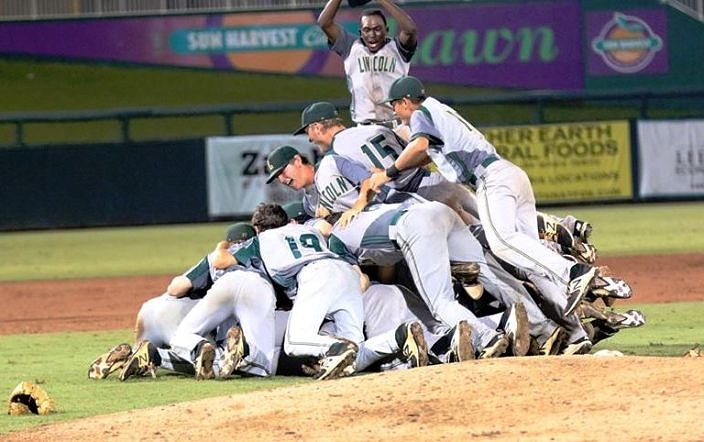 The Trojans dogpile after winning the state title on Saturday.

When you work so hard to achieve something and it’s finally right there in your grasp, it isn’t difficult to give a champion’s effort. The Lincoln Trojans came to the state tournament like a pack of hungry dogs smelling its first state title like it was meat on a truck. The players had literally envisioned that team photo together capturing their championship moment, and Saturday night that vision became a reality.

Despite falling behind early, Lincoln never took the foot off the gas and struck late to earn a 5-1 victory over Hagerty, in the 8A championship at Hammond Stadium in Fort Myers. Zach Taylor delivered a gem on the mound and the Trojans capitalized with timely hits to pave the way to victory. The team still recalls a gut-check moment early in the season as they toiled around .500, before turning things on and ending the season with 15 straight wins and the state crown.

“They really do have a passion to compete and succeed,” First-year manager Mike Gauger said. “They want to win, they want to battle and they’re not afraid of the fight. It took us a few weeks at the start of the season to figure out that we we’re not scared of the fight and once we figured it out we were a pretty talented group and things started going our way. This is the outcome.”

Lincoln was well-built with depth in the bullpen if needed, but Taylor only came out in the end due to the pitch limit. Taylor kept the ball low and induced ground ball outs with good, late run, a changeup and a slider. He allowed an unearned run on four hits, did not issue any walks and struck out six.

“He was a giant-killer for a few games earlier this year when we were struggling,” Gauger said. “He pitched against some really good teams and was a ball-hog in his starts on Tuesdays. We knew with him taking the ball, if he kept it down in the zone we would have a chance, which he did.” 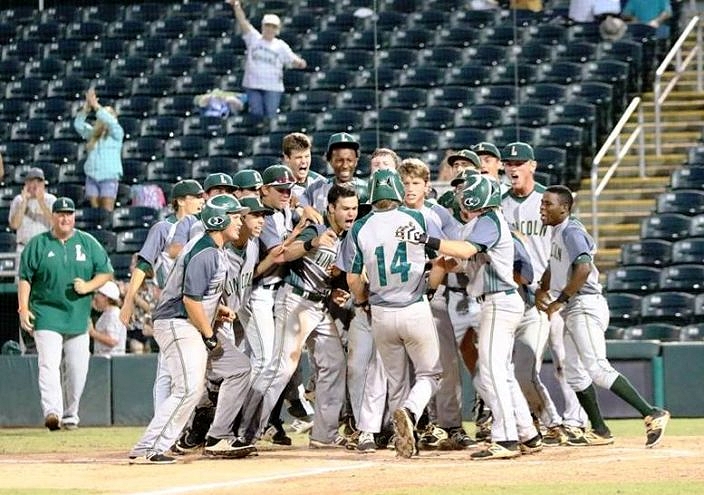 The Trojans welcome Austin Pollack to the plate after his two-run home run.

Lincoln senior Austin Pollack erased that deficit with one swing to put the Trojans in front in the fourth. Dallen Leach walked and was replaced by courtesy-runner Tahj Cunningham, who quickly stole second to get into scoring position. Pollack then jumped on a hanging pitch up in the zone and connected cleanly through the ball to send it soaring high and deep over the right field fence for a two-run home run.

“I know I missed it the first at-bat and I got out front, and earlier in my second at-bat he threw me that same pitch, but I missed it and hooked it down the line. Luckily, I got it again and I didn’t miss,” Pollack said. “I didn’t really feel it, and that’s how I knew I hit it good was that I didn’t feel anything. I just saw the ball go over the fence.”

After working through a threat in the bottom of the fourth, the Trojans got back at it to tack on two more runs in the fifth. Jordan Ulee singled on a hard liner to third base and Shaun Randolph dropped down a solid bunt that slowly rolled along the third base line for a bunt single.

“Hitting is contagious, so once somebody starts it off everybody feeds on it,” Randolph said. “When you have to start hitting with one out or if a bunt does it, that’s just automatic. It just gets everybody going.”

Jesse Hall then rolled a grounder to the shortstop for a fielder’s choice that erased Randolph at second and left runners at the corners as Hall beat the back-end throw on of the double-play attempt at first. Josiah Miller lined an RBI single up the middle, and a passed ball then allowed Hall to score for a 4-1 advantage.

“I think everybody was a little tight at first, and Shaun was getting on in front of me and it helped me to loosen up and I found the barrel and we strung some hits together and some runs,” Hall said.

Lincoln added on one last run in the top of the seventh. Randolph lined a single to left and Hall followed with a double deep to center. A passed ball then allowed Randolph to race home for the Trojans’ last run of the night.

Lincoln wins the 8A state championship!!!

Lincoln celebrates their 8A state title!